Maggie and Tony take a stand for mental health 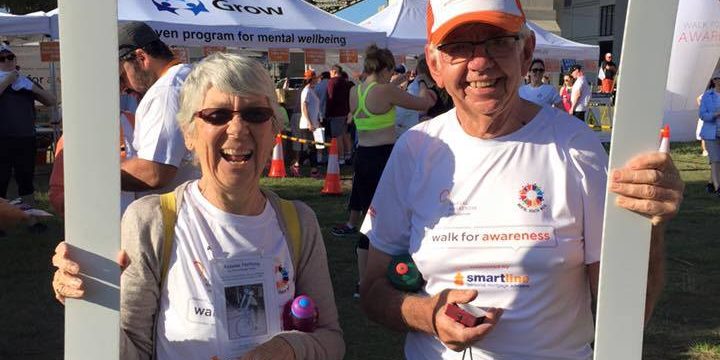 Maggie and Tony have registered to take a stand for mental health and walk for awareness in 2019. Unfortunately, they couldn’t attend in 2018 through ill health but that is all behind them now. 2019 will be the 5th time they are testing themselves in the 8km around Brisbane to share, support and value mental health and wellbeing.

“Our second son, Mark, was a carpenter by trade living with his wife Tania in Coolgardie, West Australia. We lived in WA until 2005. In 1996 Mark had recently started his own business as a carpenter. He was 28 then. Mark was also a champion cyclist. He was West Australian Pursuit Champion in 1986 and represented his state several times. He loved camping in the bush, family get-togethers and was always the life and soul of the party.

On January 16th, 1996 we received a phone call from the police at Meriden, in the early hours of the morning. The caller said “can you tell us the name of your son’s dentist!! That was the opening line. He went on to say that Mark’s body had been found by the railway line at Meriden.

Fast track several years to 2000. A chance meeting with the CEO of Focus on the Family led us to write a booklet ‘Assume Nothing’. Our journey after Mark’s death. It contains chapters from our other two sons and a neighbour. The booklet which was circulated to many people gave us some closure as we each had a different viewpoint.”

What message are you both now trying to share with the wider community?

Potential mental health issues have made us sensitive to the signs in our friends and family. We take every opportunity to share our message of Assume Nothing as with Mark we were totally unaware of what was happening.

Who is your support army?

We have a mission field in our church, two large motorcycle organisations and our day to day contact. We share as often as we can. As a published author I use my contact base to spread the word.

What motivates you both to stay positive?

We stay positive because we talk about issues and following my late father-in-laws philosophy ‘do not let the sun go down on your troubles’. We do have a strong Christian faith.

What does the ‘Walk For Awareness’ mean to you both personally and how valuable will the day be?

The chance to meet people who have walked the same journey. The day gives us strength for the years ahead. We need to make time to stop and listen, just a hug, just to be there. We missed last year because Maggie had ill health. We are doing the walk once a week now, stopping for a coffee though so we will be fit on the day. We are 79 years and 76 years but still young at heart.